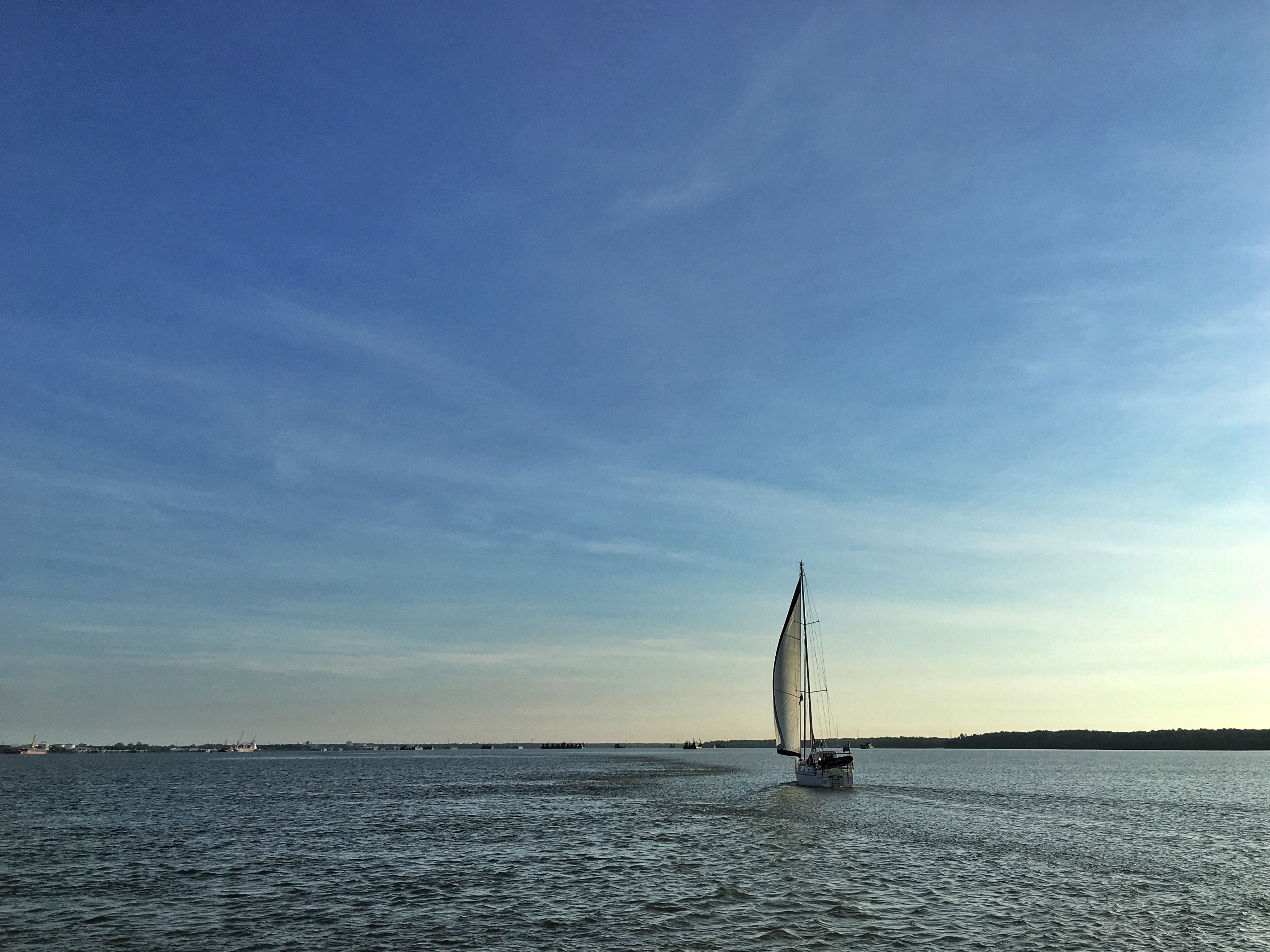 The longest river in Malaysia

Some 560 km from source to sea, the Rajang is Malaysia’s longest river. It is navigable by yacht as far as the major town of Sibu, about 130 km inland depending on which route is chosen. Downstream from Sibu the river splits into a wide and muddy delta, with four exits to the sea. It’s about 80 km from the northern entrance to the southern.

As might be expected with such a wide delta, the terrain is flat and featureless. But the old British charts say “Jungle,” which many would argue is alone a sufficient incentive to make the trip. There is is often much to see. Macaque monkeys are common amidst the nipah palm, otters abound and the fortunate might catch a glimpse of a python sunning itself on the mud. Eagles, egrets, herons and kingfishers are constant companions for those travelling on the river. Although usually invisible, there are abundant crocodiles too. This fact concentrates the mind if it is necessary to go into the water to clear a fouled propeller.

Unsurprisingly, the ebb tides are stronger than the flood. When there have been heavy rains inland, strong currents and floating debris can hinder most low-powered yachts. Large logs are not uncommon, and these can cause serious damage to yachts with vulnerable propellers and unprotected rudders. River water is muddy and opaque. The crews of lightly-built catamarans and monohulls with exposed propellers and spade rudders need to pay extravagant attention when underway on the Rajang.

The often strong currents have, however, scoured out deep channels and yachts needing three metres or more of water can proceed all the way to Sibu with little risk of going aground. The river is well buoyed and leading marks have been installed on the one or two tricky sections.

The southern route from the sea to Sibu via the towns of Sarikei and Bintangor has no height restrictions. But there is a new bridge on the main northern arm of the delta with a maximum authorised clearance of 20 metres. There are more details in the Sail Malaysia Cruising Guide, which can be downloaded free from this site. This relatively low bridge has also caused problems for ships arriving to load logs and sawn timber.  There is another bridge with an even lower clearance in the western delta, but this is not on a route commonly used by yachts. The Igan river, that flows north from Sibu, has low bridges that rule it out for most sailing vessels.

Sarikei is a very friendly town, with good markets. It is the regional centre for pineapples and pepper farming. Further upriver, Bintangor is slightly more ‘down at heel’ but still warmly welcomes tourists arriving on their own yachts. Sibu is a major town, perhaps three times the size of Sarikei, but with a population of mainly Chinese descent. Getting ashore in Sibu can be a challenge. As elsewhere in Malaysia, it’s worth asking at the Marine Police (Polis Marin) station where you can safely leave a dinghy. The chances are that you’ll be allowed to tie up next to the Polis boats.

From Sibu, it is possible to take a fast ferry to Kapit, and even further upriver on smaller and presumably increasingly exciting vessels. But the question is where to leave your yacht while you are exploring far away. One good option for exploring the Upper Reaches of the Rajang is to moor at Kuching Marina, take the ferry to Sibu and then to continue upriver and beyond, happy in the knowlege that your yacht is safely parked.

There are few roads in this part of Sarawak and the Rajang offers vital links to village communities throughout the delta. Fast ferries operate between Kuching and Sibu, calling at Serikai and Bintangor on the way. The town of Daro in the north of the delta is also served by the ferry network.

For many visiting the Rajang delta on a yacht, a highlight is being invited ashore to a rural village or an isolated longhouse. A longhouse is a row of private houses that share a single long roof, these days often made from corrugated iron. There is usually a common covered area in front of each longhouse that runs the entire length of the building. It’s an architectural feature that binds communities together in exactly the same way as they tend not to be in Western cultures. But longhouses are unhappily vulnerable to fire.

Many of those living in longhouses on the delta are Sea Dyaks, descendants of the headhunters and pirates that made the area ungovernable until pacified by James Brooke, the first White Rajah, in the 1840s. But old habits die hard and it is widely believed that fresh heads were collected from the Japanese invaders in the 1940s, and insurgents from Indonesia in the 1960s.

It is more than likely that a smiling individual on a rickety landing stage by a longhouse who at first seems to be waving you away is actually inviting you to stop by. The anchor holding is good almost everywhere and it is easy to anchor off and to take the dinghy ashore. But, of course, when anchoring on any river it’s wise to tuck into the shore as closely as possible and to avoid the outside of bends where tugs and barges might swing wide. It is also common for canoes to come alongside an anchored yacht and for the crew to  suggest you visit their home.  At night, an anchor light is essential. Many prefer to use a single all-around white, reinforced by several coloured flashers. In 2018 a yacht anchored near Sarikei was hit by a barge and badly damaged.

Some riverside longhouses are Christian, others Moslem. This is no place to rehearse the obvious protocols, but it’s worth making sure of your host’s affiliations before offering beer. Those living in longhouses seem fascinated by yachts and most will jump at the chance to come aboard. Yacht crews have made life-long friendships with those they first met at a longhouse on the Rajang. It is a kind of travel-experience that is very hard to replicate on a commercial tour.

In summary then, the Rajang River is a friendly and fascinating destination for a cruising yacht. But there are significant challenges in the form of fast currents, heavy debris and, in some areas, abundant traffic. Should your yacht break down, obtaining parts and skilled help may not always be so easy. Which, of course, is always the case when sailing offshore. If you are used to crossing oceans, the Mighty Rajang will offer a very different but wonderful diversion.

Patrick Southall is an avid writer and the co-author for the Sail Malaysia Cruising Guidebook series. With his partner Elizabeth Fowler, they have been sailing the globe for over 25 years (..we stopped counting at 25...) 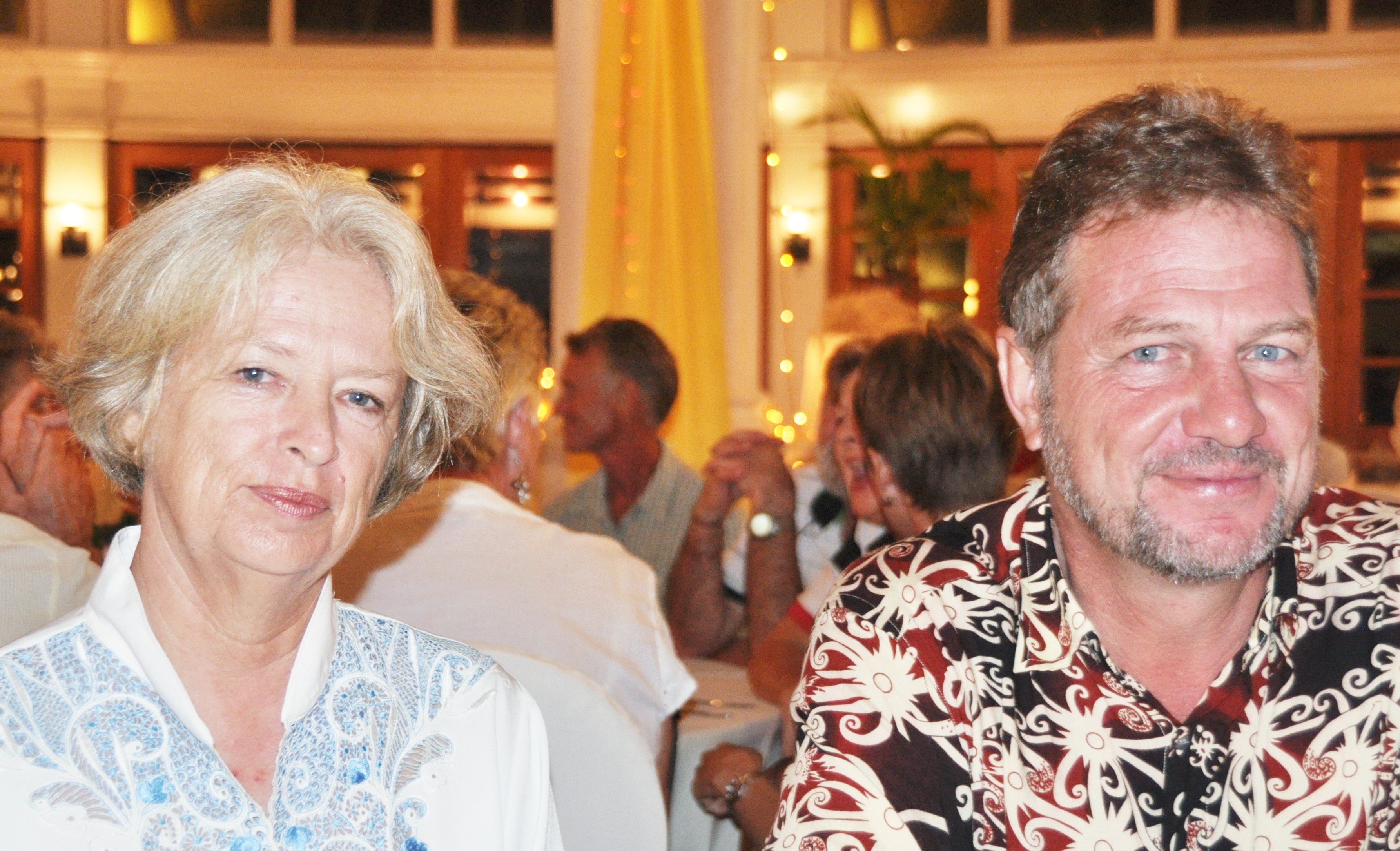