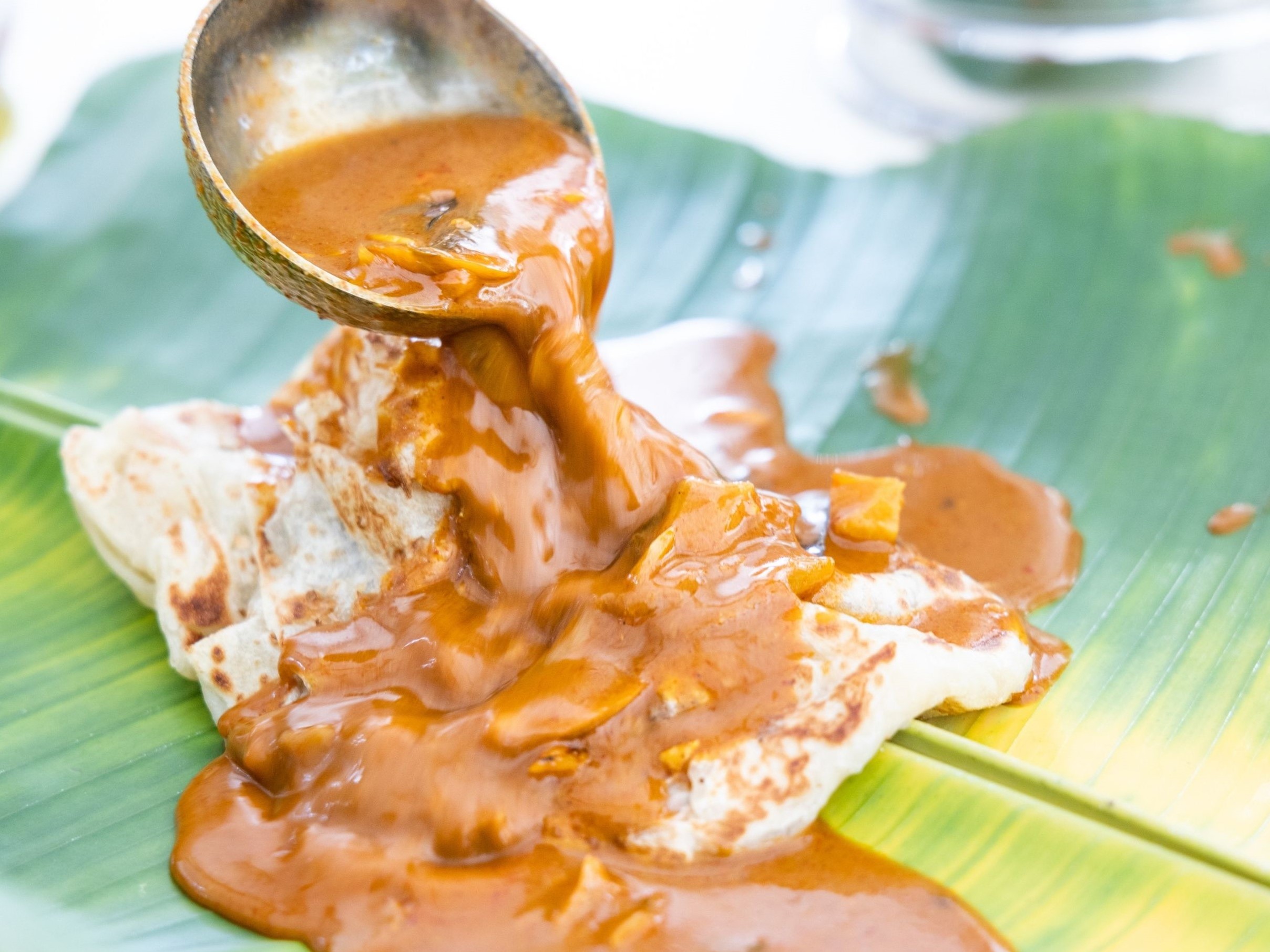 Is it worth coming to Malaysia for this?

A few weeks back I had a conversation with Gillie from SY Tupenny that gave me the inspiration to write about this topic.  Gillie is a solo handler who comes from the UK and as karma allowed it, has been in Malaysia for a few years.  She was a participant in the Passage to the East Yacht Rally and has since become a long-time friend.

Recently she told me about her plans to continue her adventure westward towards the Indian Ocean and beyond. I mentioned that maybe she should better stock up on “roti canai” because she will miss it.  She suddenly lit up and told me about her favourite roti canai haunt.  So there you go, here is a story about roti canai, for Gillie.

So what is it exactly?  Roti canai is a local flatbread made up of flour, water, salt, a bit of sugar and palm oil.  In some upmarket joints sometimes ghee replaces the oil, but in the normal Malaysian street style, palm oil is the basic ingredient.  The kneaded dough is repeatedly folded and rested for a day.  Before cooking the dough ball is stretched, folded and flattened time and time again and cooked on a flat iron surface.  The result is a delicious flat, layered, circular texture that is crispy on the outer layer and soft inside.  Sometimes, a filling is added like eggs and sardines to make different versions of roti canai.

When cooked, the roti canai is eaten with either dhal or curry.  It’s like a soft version of croissant dipped in an asian gravy, sending you directly to food heaven.

Roti canai is essentially made up of starch and oil, so it’s not the ideal diet. The protein comes from the dhal or meat in the curry, or other ingredients you might add in the filling.  So it is probably not something you consume on a daily basis if you are a protein-drinking, health conscious triathlete preparing to break your personal best.  But it is an awesome comfort food or snack when you have your cheat day (…or years).

Oftentimes roti canai is normally eaten for breakfast, but this meal/snack can be eaten at any time of the day.  So why is it so popular?  Well, first of all you have to come to Malaysia to taste it.  Here, eating roti canai is not just food, it’s a way of life.  This simple food is a national favourite, and you can see people from all ages and background enjoying this treat everywhere in Malaysia.

A quick historical fact.  Roti canai did not originate from the Peninsula.  This staple food was brought to the country by Indian migrants way back during the British colonial period.  Over many generations the dish has become a national favourite and the flatbread version you see in Malaysia today is totally different than the ones you may get in South India.  We won’t divulge deeper than this, because like many famous foods, its originality is a great source of debate and national pride.

In today’s world where everything is so accessible, you can get the Malaysian version of roti canai almost anywhere.  In my personal travels, I have had this simple flatbread in Mecca, Auckland, London, even Atlanta to satisfy my cravings.  It’s everywhere if you know where to look and it’s soooo gooood!

But like everything else I suppose, it’s not the same as the ones from its original country.  Who knows what it is about the roti canai here in Malaysia. Maybe it’s a combination of tropical humidity, local flour, palm oil, ambience… who knows..

This savoury flatbread pastry is also a very affordable in Malaysia.  A common meal combination is to have 1 or 2 roti canai together with a hot beverage like ‘teh tarik’, a Malaysian version of a frothy milk tea.  This feed in a normal restaurant in Malaysia would cost you just over 1 US dollar (I once had mine in London for USD 13 aaaargh!…but hey, ticked that box).

Oh, just a word of caution, teh tarik is a very sweet drink.  So when you order make sure you as for ‘kurang gula’, translated to less sugar.  Even this is still sweet for some, in which case you should ask for ‘teh c kosong’, which means tea with evaporated milk and no sugar.

Today the flatbread can be consumed in 100 different ways.  I am exaggerating, but there a lots of different versions.  If you add the different types of curries and dhals, the meal combinations are endless.

Here are some versions listed in wikipedia:

Roti boom (or bom) (bomb bread), a smaller but thicker roti, with the dough wound in a spiral. Served sweet, with sugar, and with margarine, or served with curry.

Roti salad, raw shredded vegetables rolled up with a piece of roti.

Roti tampal or Roti plaster (in Singapore), roti is plastered on one side with egg with the yolk left runny or totally cooked.

Roti cobra, a roti served with curry chicken and piece of fried egg on top.

Roti banjir ("flooded roti"), with much curry poured over the top.

The most eye-cathing of them all would be Roti Tissue.  The picture below shows the finished product in Nasi Kandar Kayu Restaurant!

We are pretty sure there are other versions being ‘invented’ all the time.  Essentially ingredients can be added to your taste or experimentation to the basic flatbread.  We have even seen roti goreng.  It’s like mee goreng (fried noodles),only the noodles are replaced with roti canai.  Good for the brain, not so good for the heart this one.  I love my food, but this is where I draw the line, hmmm.

One common the questions is can you store roti canai?  You can buy them frozen at most supermarket in Malaysia these days.  The other option is to buy them fresh and freeze them when you get on the boat.  It’s essentially bread so it will last a long as any bread lasts in freezer.

So that is a brief introduction to one of Malaysia’s most loved dish.  The main question now, is it worth while sailing to Malaysia just to taste roti canai?  Absolutely!